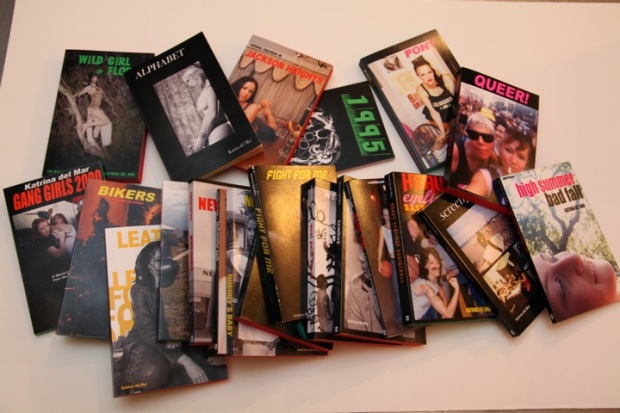 More Info:
Artist Katrina del Mar has invited some of her favorite writers and musicians to read and perform during her exhibition GIRLS GIRLS GIRLS at Participant Inc.

Eileen Myles was born in Boston (1949) and moved to New York in 1974 to be a poet. Snowflake/different streets(poems, 2012) is the latest of her 18 books. Inferno (a poet’s novel) came out in 2010. For The Importance of Being Iceland/travel essays in art she received a Warhol/Creative Capital grant. In 2010 the Poetry Society of America awarded Eileen the Shelley Prize. She is a Prof. Emeritus of Writing at UC San Diego. She’s a 2012 Guggenheim fellow. She lives in New York.

Melissa Febos is the author of the memoir, Whip Smart (St. Martin’s Press, 2010). Her work has been widely anthologized and appeared in publications includingGlamour, Salon, Dissent, The Southeast Review, New York Times, Bitch Magazine, The Rumpus, Drunken Boat, Hunger Mountain, and The Chronicle of Higher Education Review. She has been featured on NPR’s Fresh Air, CNN’s Dr. Drew, Anderson Cooper Live, and elsewhere. The recipient of MacDowell Colony fellowships in 2010 and 2011, and a 2012 Bread Loaf William Sloan Fellowship in Nonfiction, Melissa co-curates the Mixer Reading and Music Series in Manhattan, teaches creative writing at Sarah Lawrence College, and lives in Brooklyn.

Amanda Pollock is a writer, bookmaker and singer based in New York City and Baltimore. Amanda was the singer in the rock and roll bands Cloaca and The Velvet Mafia. She holds a BA in English and Education from Smith College and she was awarded a first place honors in the BMCC writing and literature program for her poem “Of Hymn and Him” in 2007. She self publishes her writing in hand made books.

Katrina del Mar  is a New York-based photographer and award winning film director. Her solo exhibition Gangs of New York was presented in 2010 at Wrong Weather Gallery in Porto, Portugal. Invited to teach at the University of the Arts in Bremen, Germany, she conducted the first ever Queer Trash Feminist Film Workshop, also in 2010. In 2012, she presented a series of films and photographs from the Golden Age of Performance Art (1988-2000) with Dona Ann McAdams, On the Edge of Society: Moments in Live Art, at Warehouse 9, Copenhagen, Denmark.

Karyn Kuhl was born in a bank parking lot in Newark,NJ.  She had her first gig at age 9 at Sacred heart Church.  She went on to become the front person for Gut Bank and Sexpod and is currently recording her 3rd solo album.

Sarah Greenwood is a songwriter and performer, born in Switzerland to British transplants.  Graduate of the prestigious Berklee College of Music, Sarah is the recipient of multiple Professional Writing Division Awards for Songwriting from Berklee.  She released several well received eponymous EP’s including “24 Hour Shift” before forming GSX, known for its fiery live performances.  Sarah’s full length album “Manifest” was released in 2005 and GSX headlined and played both internationally, notably to a crowd of 50,000 in Reykjavik, Iceland and nationally, at notable venues including the Gramercy Theater and the notorious CBGB’s, where they opened for Joan Jett.